I’ll be tasting that Mortlach 75 YO tomorrow

It’s true, it’s happening, yes you are right to dislike me, and yes you should be envious.

Tomorrow, I’ll be attending a tasting led by Stuart Urquart at Gordon & MacPhail, during which a bottle of Mortlach 75 YO – the oldest whisky ever bottled – will be opened and shared together with people mad enough to purchase tickets for such an event. This is huge. Only 100 bottles were released, and trust me, the price for these babies is so steep it’s safe to say that most will never be opened. I’m feeling like a seven-year-old on Christmas Eve, just pining for that day when finally, the Christmas presents will be opened. And no matter how much I’m trying to tell myself that there are five other more or less crazy whiskies that I’ll be tasting in the same session, I cannot escape the sense that that Mortlach, the Mortlach, is going to be in a glass which I am going to drink. The world’s oldest whisky. The world’s. Oldest. Whisky. Ah, let’s just call it TWOW.

So, the whisky was distilled and put in a cask on 17 November, 1939. It’s just at the beginning of World War II. Hitler is doing really, really well at this point. As an historian by profession, I know I’m being extremely lazy and sloppy by going to wikipedia for help, but what the hell, this is just an intro. Here’s what wikipedia has to say about that day:

Germans stormed the university dorms in Prague and other towns in the former Czechoslovakia, attacking and arresting thousands of students. The Nazis executed nine Czechs by firing squad without trial that day for leading the recent demonstrations.

It kind of puts things in perspective, doesn’t it? On that same day, the guys at Mortlach filled a first-fill sherry butt. If they had been told that it would be another 75 years until Gordon & MacPhail would bottle it, they would not have believed their ears: it was an age before the rule of single malts, before releases of single casks, and of course, the notion of waiting three quarters of a century would have seemed outrageous to them.

Nothing but really young NAS whisky matured in tired seventh-fill casks. NOT.

I’m working hard, on a mental level, to not think of five of the whiskies I will be tasting as a mere backdrop to TWOW. These are six stunningly interesting whiskies, not one interesting whisky.

Now, since it is in my nature to always argue a bit back and forth and be critical even when I’m excited, I just have to say a few things. To some extent, Mortlach 75 YO is not a whisky. It belongs to that category of whiskies which are released more or less as publicity stunts. Not that I think it won’t be amazing, I have the utmost of respect for Gordon & MacPhail and they would never release it if it wasn’t good. But the extreme bottle and the extreme price (somewhere around €27,000, but who keeps count, right?) both make this a bottle for people with way, way, way too much money on their hands to buy as an investment. To call it a collector’s item is to be naïve: no collector spends €27,000 on a whisky just to own it. The Mortlach 75 YO, then, is more of a stock at the exchange or a fund than it is a whisky.

That is also why I tip my hat to the Swedish whisky importer Symposion for arranging this tasting – for seeing to it that a bottle is actually opened, and for charging a price for the tasting which is way lower than the market price of even just the Mortlach. As Thomas Kuuttanan at Sympsion says on their website (my translation from Swedish):

We believe that whisky should be enjoyed. We have an obligation not to hide a sensational whisky of this caliber in our treasury. We want to share it with whisky aficionados who will understand what a truly unique experience this is.

I like his thinking: all whiskies, even extreme whiskies like this, are, after all, made to be enjoyed. Of course, the tasting also means a lot of positive publiciity for them – like the one I’m just giving them…!

By the way, wouldn’t it have been so much cooler if Gordon  MacPhail, who usually release whiskies with a very low-key kind of design, had chosen to pour this whisky into a standard bottle, with a standard Gordon & MacPhail label? I think so, at least, although it would seem I am fairly alone in thinking that the actual bottle, much like its predecessor Mortlach 70 YO, is just about the ugliest bottle on the planet.  I have written about extreme design of bottles before (sorry for linking to a text in Swedish), and my opinion remains the same: these designs are, to say the least, very silly. 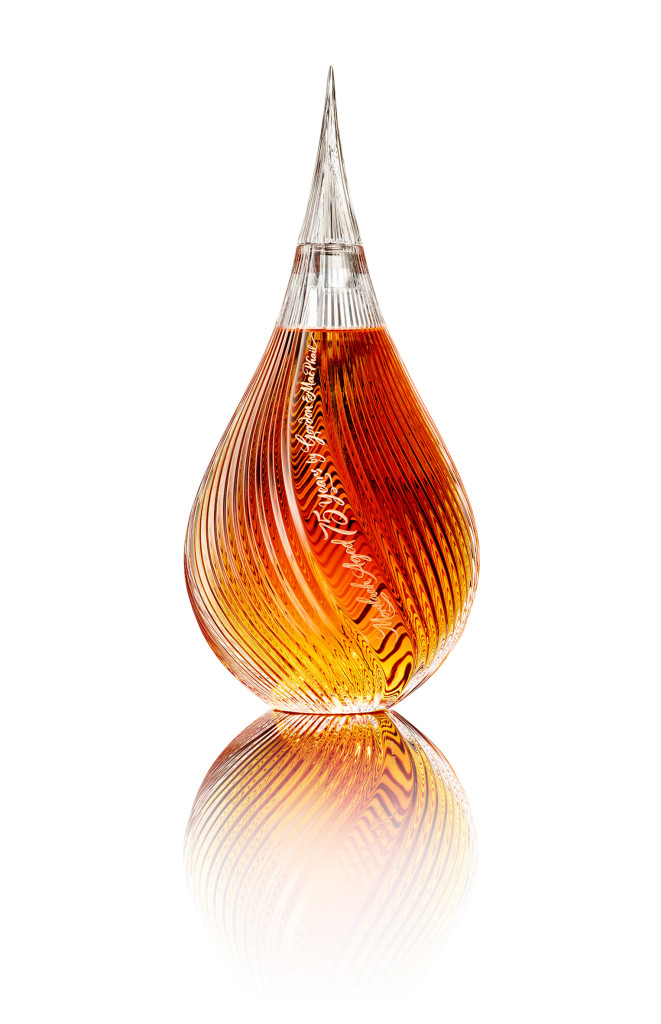 Is it a perfume? Is it decanter? A bottle of whisky, you say? Really?

The design has been made in order to ensure a maximum amount of media exposure, the price charged is such that many articles should quote it, and the photograph taken at the solemn revelation of this whisky is meant to spread out into the world of glossy magazines, so that words like ”Mortlach 75 YO” and ”Gordon & MacPhail” should resound through the universe. The bottle, to a certain extent, is click bait. And hey, like I said above, I’m part of it, falling to easily for the possibility of tasting TWOW. No use in stopping now, so here we go:

TWOW. Check out the look of the dude in the background!

This picture just wouldn’t play if the bottle looked absolutely ordinary. But to my mind, it would have been so much more fun.

Now, having said all of this, I’m still very much looking forward to tasting the Mortlach 75 YO and the other whiskies tomorrow. It’s just a little more than twenty-four hours until I get to try it. Today is TWOW minus one. I’ll let you guys hear what I thought of it.